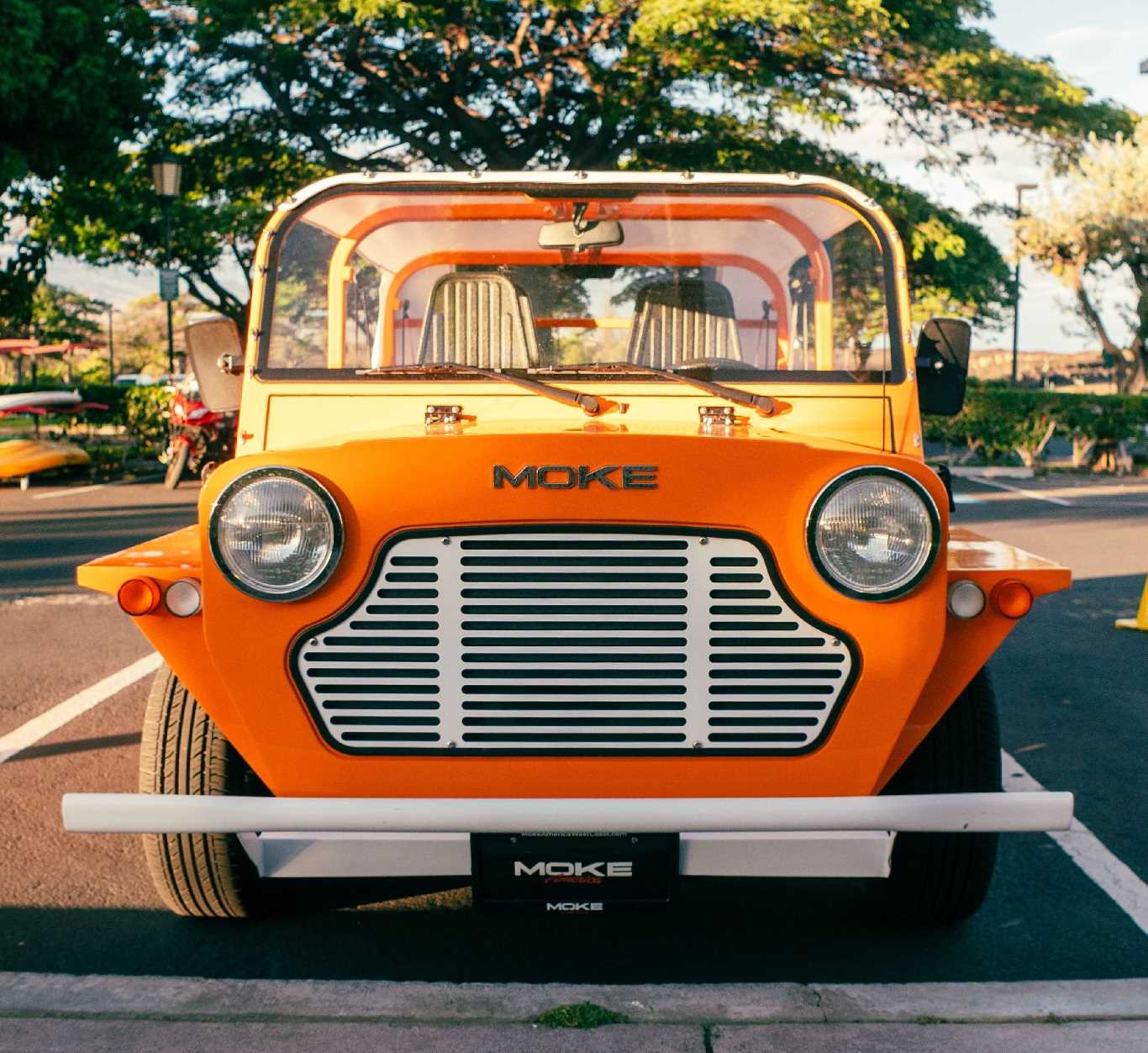 Moke Electric Car: Compact, fashionable, and electric are all typically incongruous adjectives. The latest electric vehicle, the Electric MOKE, shows that they can be merged, even in a highly novel way.

The replacement for the Mini Moke is right in front of us. This vehicle was introduced in the 1960s and was based on the Mini hatchback. The Moke model was first developed for the military. However, it was unable to meet their needs fully. The Mini Moke eventually changed into a “civilian” vehicle, such as a beach buggy, golf car, or entertainment vehicle, because no one wanted to abandon the nearly finished model.

MOKE International is thrilled to announce the launch of the MOKE electric car. First deliveries are anticipated in time for the 2022 summer season in Europe, and you can make reservations right now.

Internal Combustion Engine (ICE) MOKE orders will no longer be accepted beginning on January 1, 2022, making the brand the first heritage manufacturer worldwide to go to all-electric production. Customers interested in purchasing the last of these can do so from the Hendy Group, MOKE’s authorized UK distributor.

The launch of the MOKE all-electric car is a response to persistent consumer demand for a vehicle that evokes one of the most beloved cars in history and is prepared for the urgent need for clean-air powertrains worldwide. Indeed, electrification strengthens the extraordinary promise of the MOKE by combining a significantly improved performance with the advantages of a silent powertrain for peaceful open-air driving.

Nothing compares to the excitement of driving through the most stunning beach resorts in the world in an open-top MOKE. The rapid and silent power delivery that comes from an EV engine further adds to the enjoyment of this experience. The new MOKE electric car only takes 4.5 seconds to accelerate to 55 km/h. 33 kW of maximum power is more than sufficient for a car that weighs only 800 kg. The range is adequate for five roundtrips from Cap-Ferret to Monaco (144km). On the Type 2 EU Standard, charging takes 4 hours, and the top speed is 100 km/h.

Any MOKE electric car can be ordered with a right- or left-hand drive. Prices start at £29,150 + VAT. Deliveries will be made in Europe in time for the summer of 2022. This system’s battery cells, motors, and inverters were all custom-engineered in the UK by Tier 1 European producers.

Electrification marks a new era in the history of one of Britain’s most storied and revered brands in automotive history. The MOKE was conceptualized by Sir Alec Assignors, the renowned Mini Designer. He was tasked with designing a vehicle that could drop from an aircraft behind enemy lines. It is status as the premier beachside-to-waterfront shuttle was cemented by the 1960s glamour set, which included The Beatles, The Beach Boys, and Brita Bardot.

In 2017, MOKE International brought the brand back to life by launching a series of limited-edition products that have been hugely popular with both MOKE employees and a brand-new generation of fun-seekers. This commercial success was the foundation for the considerable investment to electrify the brand and secure its long-term survival.

MANUFACTURED IN THE UNITED KINGDOM

All electric MOKEs will be produced at a cutting-edge facility run by the Fab Link Group in the country where the marque was founded, the United Kingdom. The company’s headquarters are in Northampton shire, at the heart of the British automotive industry, and they draw some of the best manufacturing, technical, and engineering experts around.

All electric MOKEs will be handcrafted by a professional team from a business with expertise in working with some of the world’s top automakers, like Jaguar Land Rover and Morgan, to provide design, manufacturing, and engineering services. With six UK locations and more than 500,000 square feet of production space, the company employs about 700 highly qualified engineers, production operators, and technicians.

This long-term commitment to UK manufacturing was made possible by grant funding from Niche Vehicle Network, provided by the UK government. Also, the recent trade agreement that allows UK automotive companies tariff-free access to the EU market under predetermined rules and origins has enabled this. The company has confirmed its commitment to the UK by developing several important positions in commercial functions.

A team has been put together by MOKE’s CEO, Isobel Dando, a former Rolls-Royce product lead, to fulfill the promise of a next-generation powertrain vehicle. Polestar, Jaguar Land Rover, Rolls-Royce, MINI, and BMW are just a few of the top automotive engineering and design brands that these highly qualified engineers, designers, and technicians represent.

Together, they have created a contemporary take on MOKE’s renowned open-top driving dynamics, allowing consumers to tailor the vehicles to their unique preferences and interests. The engineers’ main priority is maintaining the fun and adaptability contributing to automobiles’ long-standing popularity.

The new electric MOKE was designed to enhance the driving experience from the bottom up significantly. Due to the use of aluminum panels, the vehicle’s weight has been drastically reduced for a more agile ride, and the electric motor’s immediate torque has significantly enhanced acceleration and drivability. The electric MOKE has undergone much additional development, including better braking systems and more occupant and pedestrian safety features. Heated windscreens, regenerative braking, and power steering are the final features that offer ease of use.

What is a moke car?

Originally produced and marketed by British Motor Corporation (BMC), the Mini Moke is a compact, front-wheel-drive utility and recreational convertible now sold under the Austin, Morris, and Leyland names. The name combines Mini and Moke, an old word meaning “mule.”

What is the price of a Moke car?

Although Moke may lack cutting-edge technology, its vehicles should provide more than enough for travelers and beachgoers to enjoy some open-air driving. Pricing ranges from $25,000 to $33,275 at its highest point.

How quickly can a Moke move?

Is a moke considered a slow car?